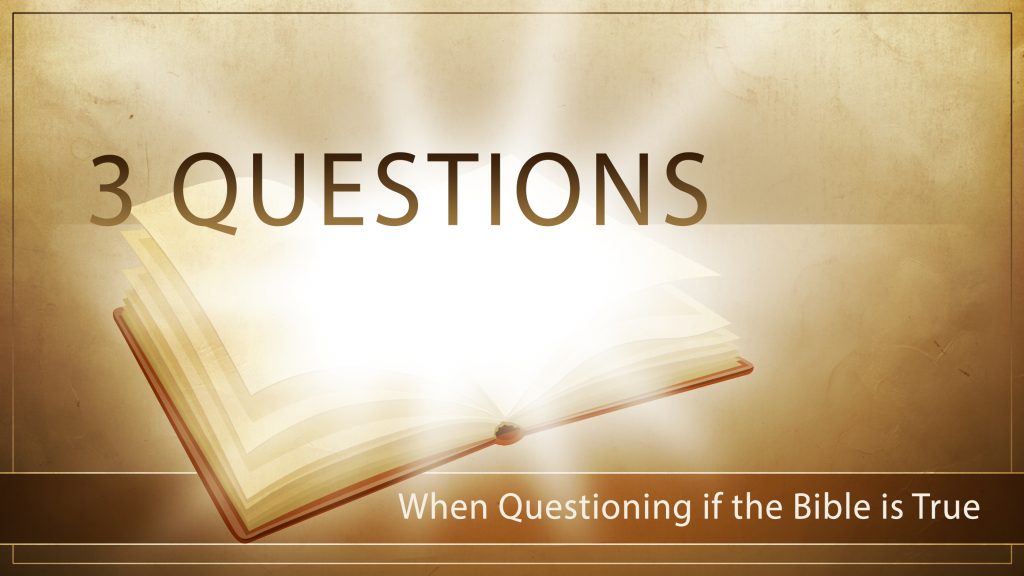 Consider these three questions to ask when struggling with whether you believe in the truthfulness and reliability of the Bible:

How did the authors of the Bible know things about the future with such great precision that would have been impossible to know otherwise? There have been plenty of people in history that have claimed to make predictions about certain things in the future (i.e., Nostradamus). But for every “prophecy” that has seemingly come true, many, many more have not. Add to that the fact that the “prophecies” that even seemingly come true include many details that are completely wrong. It doesn’t take long to realize that these so-called prophets just happened to get lucky with vague enough “prophecies” that could be connected to several possible distinct events. On the other hand, the Bible contains hundreds of fulfilled prophecies – prophecies about the rise of various kingdoms (Daniel 2), prophecies about certain rulers (even the name of King Cyrus, more than a century before his birth; Isaiah 44:28), prophecies about the birthplace and life of Jesus (Micah 5:2), and prophecies about the Roman practice of crucifixion before it was even invented (Psalm 22:16-18). This is far from an exhaustive list.

How did the authors of the Bible know things about science that would not be discovered until hundreds, even thousands of years later? For example, it wasn’t until 1847 that doctors realized that harmful, microscopic germs could be moved from a corpse to a living patient, when more than 3,000 years earlier the Israelites were already imposing a seven-day quarantine on those who had touched dead bodies (Numbers 19:11-12). Additionally, thousands of years before the reasoning came to light, Hebrews were expected to circumcise their baby boys on the eighth day (Genesis 17:12-14). Why? As it turns out, a specific vitamin necessary for the clotting of blood is over one-hundred percent greater on the eighth day than any other day of life. These examples only touch the hem of the garment on biblical scientific foreknowledge – books could be written about its foreknowledge regarding the paths of the sea (Psalm 8:8), the shape of the earth (Isaiah 40:22), the transmission of diseases (Leviticus 13:45-46), and so much more! In many of these cases, not only had science not discovered these truths, but there would have been no way to discover them because of the absence of the necessary tools and apparatus to see the cause behind things like diseases (i.e., microscopes).

How did the authors of the Bible always remain historically accurate – especially given that most, if not all, of the authors were not trained historians; but were instead fishermen, tax collectors, religious leaders, and sheepherders? Not a day goes by when a news agency is not needing to amend or update their latest online news story because of new information, previously incomplete information, or even false information. If the words of scripture were not guided by the all-knowing hand of God, one would expect that there would be numerous inaccuracies and needs for correction. Instead, what you find is that not only do the writers corroborate one another, but centuries – even millennia later – archaeological finds are corroborating the recorded history of the Bible writers. On numerous occasions, the Bible has been called into question because of its references to various historical places and figures (i.e., King David or the Hittite people). Because at the time these critics did not have extrabiblical evidence of these places or figures, the veracity of the Bible was called into question. But in nearly every one of those cases, the Bible is proven to be accurate when a spade unearths a piece of pottery or a monument that substantiates its claims. In the cases where there is still yet to be discovered any extrabiblical evidence, the pattern of the past would cause one to expect that it’s only a matter of time before the skeptic’s criticism again rings hollow because of a new-found discovery to the contrary.