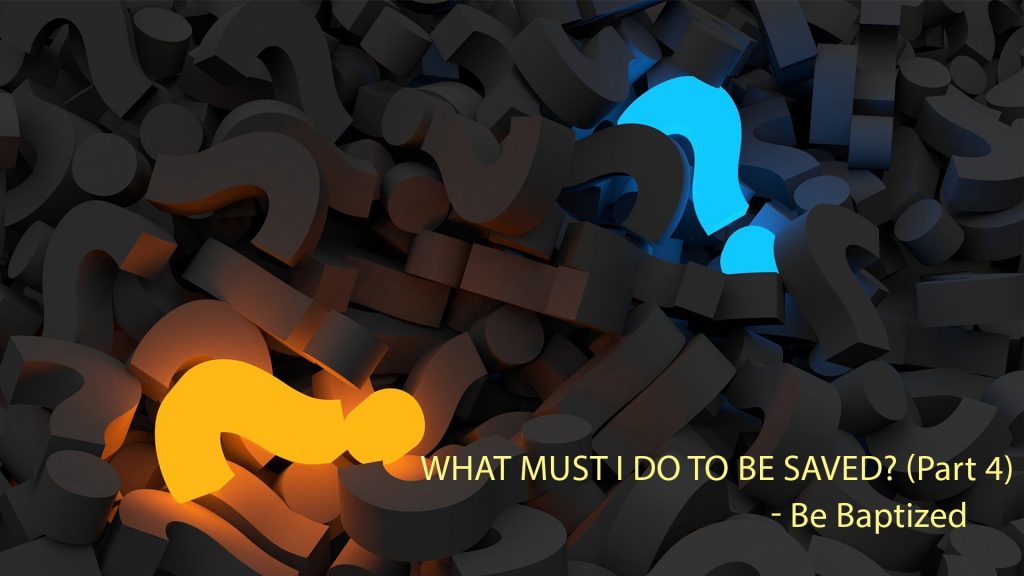 The Meaning of Baptism – Immersion

Our English word, “baptism,” is actually a transliteration – meaning, the original Greek word “baptizo” was taken and made into an English word. According to Thayer’s Greek Lexicon, the literal meaning of the word “baptizo” is “to plunge, or to submerge.” The proper understanding is full immersion. Baptism is a burial of an individual in water. Baptism is not a bath that one takes to clean their physical bodies of filth (1 Pet. 3:21). Rather, baptism is a physical plunging, but with a spiritual purpose. It does not wash away the dirt from our bodies – it washes the sin away from our souls (Acts 22:16). If one were to develop a faith in Jesus, repent of their sins, confess His name, and yet fail to submit to baptism, they would still have their sins on their record and they would inevitably face eternal punishment.

The Essentiality of Baptism – Commanded by Jesus and the Apostles

It has been suggested that some have some placed too much emphasis on baptism. However, consider that the New Testament contains the word “baptism” (or its derivatives) around one hundred times. Additionally, it refers to it by several other words or ideas, such as being “born again,” “washed,” or a “burial.”  Furthermore, records of Jesus’ and Paul’s baptism clearly indicate it’s importance. Jesus taught that only those who were “born of water” can be part of God’s Kingdom (Jn. 3:3-5). Jesus later commanded that His followers go out and make disciples of all nations – explicitly including the baptism of those individuals (Matt. 28:19-20). There are too many examples of its importance in scripture for the question of its essentiality to even be considered. To negate the essentiality of baptism is to be unfair with the Holy Scriptures of God. If all of that were not enough to be convinced of its importance, consider that the Apostle Peter explicitly states that “Baptism…saves you…(1 Pet. 3:21).

The Significance of Baptism – Reenactment of the Gospel

When we submit ourselves to baptism, we are reenacting the Gospel of Jesus Christ. The Gospel is the death, burial, and resurrection of Jesus (1 Cor. 15:1-4). Though not simply symbolic, the baptism process for a sinner is a picture and reminder of what Jesus has done for us. Just as Christ died and was buried, so too is the penitent sinner who recognizes their condition and chooses to die to self and be buried in a watery grave. But, just as Christ was raised from the dead, so too are we spiritually raised from the dead to “walk in newness of life” when we come up out of the water (Rom. 6:4). We arise as a new person with a sin-free record.

The Result of Baptism – The Point Salvation Occurs

Again, some wrongly suggest that baptism is an outward sign of the fact that you’ve already been saved. Others also wrongly assert that to suggest that baptism is essential for salvation is to suggest that one can save themselves. However, a person who fully understands scripture’s teaching about baptism will recognize that it’s the saving blood of Jesus that saves us – but it’s not until the watery grave of baptism that one contacts the blood of Jesus. Baptism is the exact moment, the exact point in time, in which one goes from lost to saved – not of their own doing, but because of a trusting faith in the working of God in the waters of baptism (Col. 2:12).